Or find a villa by reference 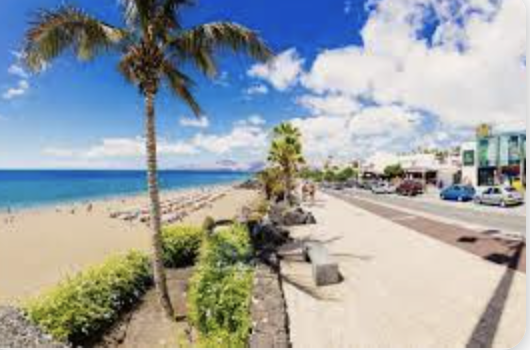 The area of Puerto del Carmen was inhabited before the arrival of the Normans on the island and, at least since the 16th century, known as Tiñosa, so it appears on the maps of Torriani (as Tinosa), Brihuela/Cosala (as La Tiñosa), P.A. del Castillo (as La Tiñoça) and Riviere (as La Tinosa). This toponym is probably of Guanche origin, adapted to the phonetics of Spanish and related to other lexical variants such as Tiñor in El Hierro or Tiñoa in Tenerife.

After The Conquest it becomes a place of anchorage. In 1591 Leonardo Torriani, refers to the natural port of La Tiñosa. Later on, it became important with the barrel trade.

In 1900 it was declared a Port of General Interest, a distinction it lost in 1928 in favour of Arrecife. In 1904, La Tiñosa became a town with 194 inhabitants, mainly dedicated to fishing. In 1957, the small fishing village was renamed Puerto del Carmen, in honour of Nuestra Señora del Carmen.

From the coast it has been extending inland, up to a distance of approximately one kilometre.

Puerto del Carmen is located on the east coast half way down Lanzarote, just a 10-minute drive from the airport. There are more than 6km of beaches protected from the trade winds (Grande Beach, Los Pocillos and Matagorda being the most extensive), and a wide variety of hotels, apartments and villas.

In May the Lanzarote IronMan triathlon, which is a major international athletics event, starts and finishes on the Avenida de Las Playas in the resort.

For those of you who like a more leisure form of exercise there is an 18-hole golf course situated within easy reach.

On the outskirts of the resort is Rancho Texas Theme Park, which has a zoo and Water Park amongst it’s many attractions.  It also has themed nights for all the family to enjoy.

One of the islands two go-carting tracks is also located close to the resort, Gran Karting Club Lanzarote.

From the old town it is possible to walk along the cliffs to the beautiful international marina at Puerto Calero, which has a range of designer shops and restaurants and bars.  It also offers a submarine safari and catamaran excursions.  If you don’t fancy the walk back there is a water taxi service available from the Marina.